The view of Elmina Castle from the General's Quarters atop the courtyard.

2019 marked the passing of 400 years since the first slave ship departed from the Gold Coast, now known as Ghana. Ghanaian officials dubbed 2019 as the "Year of Return", in which Ghana welcomed Black people across the world to re-establish their link to the African Diaspora. The year served as a pilgrimage for Black people across the world, who flocked back to Ghana in droves to reconnect with their African heritage; a connection that was broken by the Trans-Atlantic Slave Trade.
As a part of this pilgrimage, many Black returnees made their way to the hundreds of slave castles littered along Ghana's coast, paying their respects to the torturous suffering their ancestors endured at the hands of European Imperialism.
One such castle is Elmina Castle.
Taken during my 6th visit to Ghana for the Year of Return, this photo series aims to provide a short account of Elmina Castle's origins and present the Castle in the perspective of someone engaging with this dark, diabolical history for the first time. The facts in this article were communicated by the guide that escorted us through the Castle's horrors. 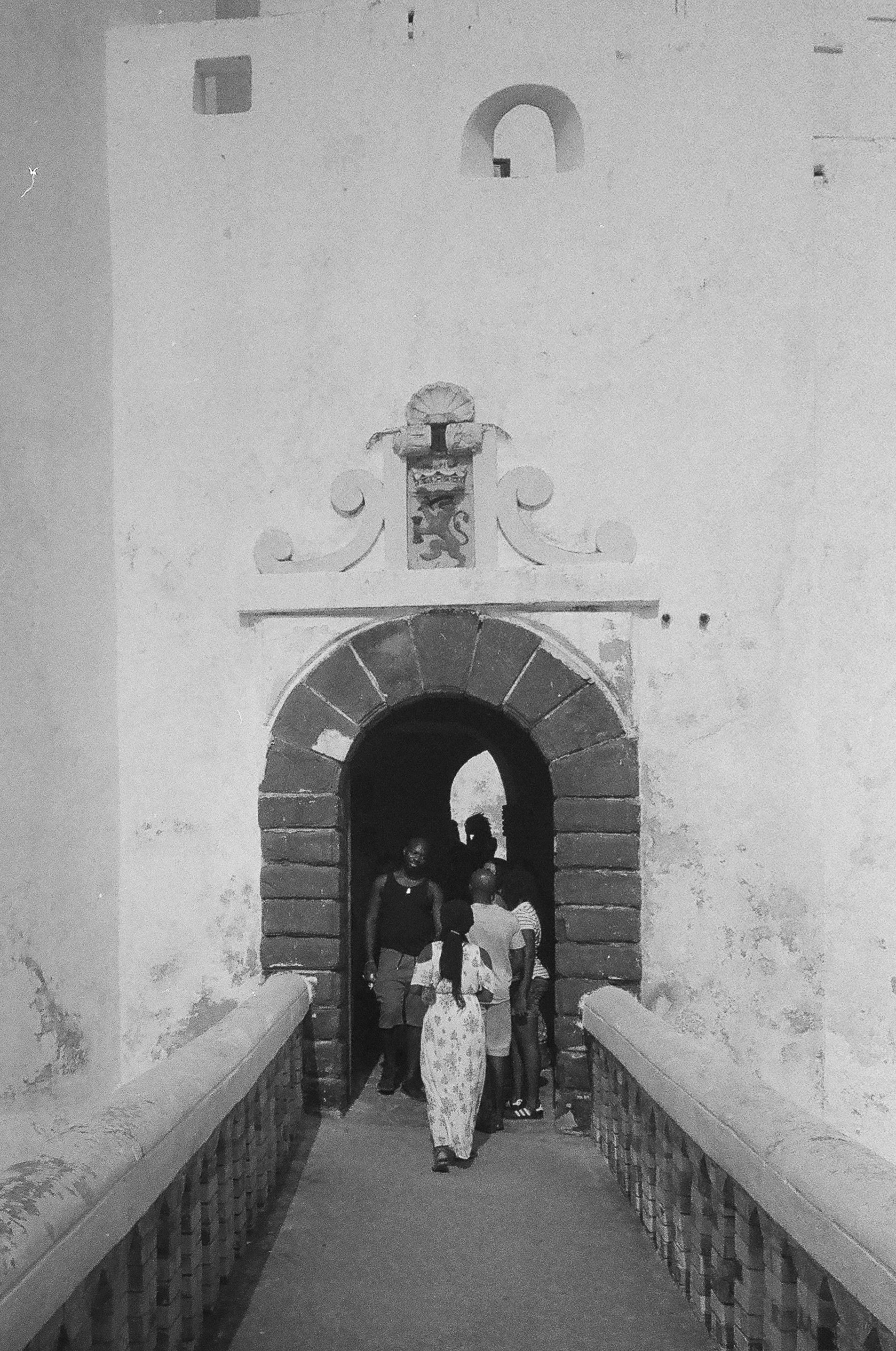 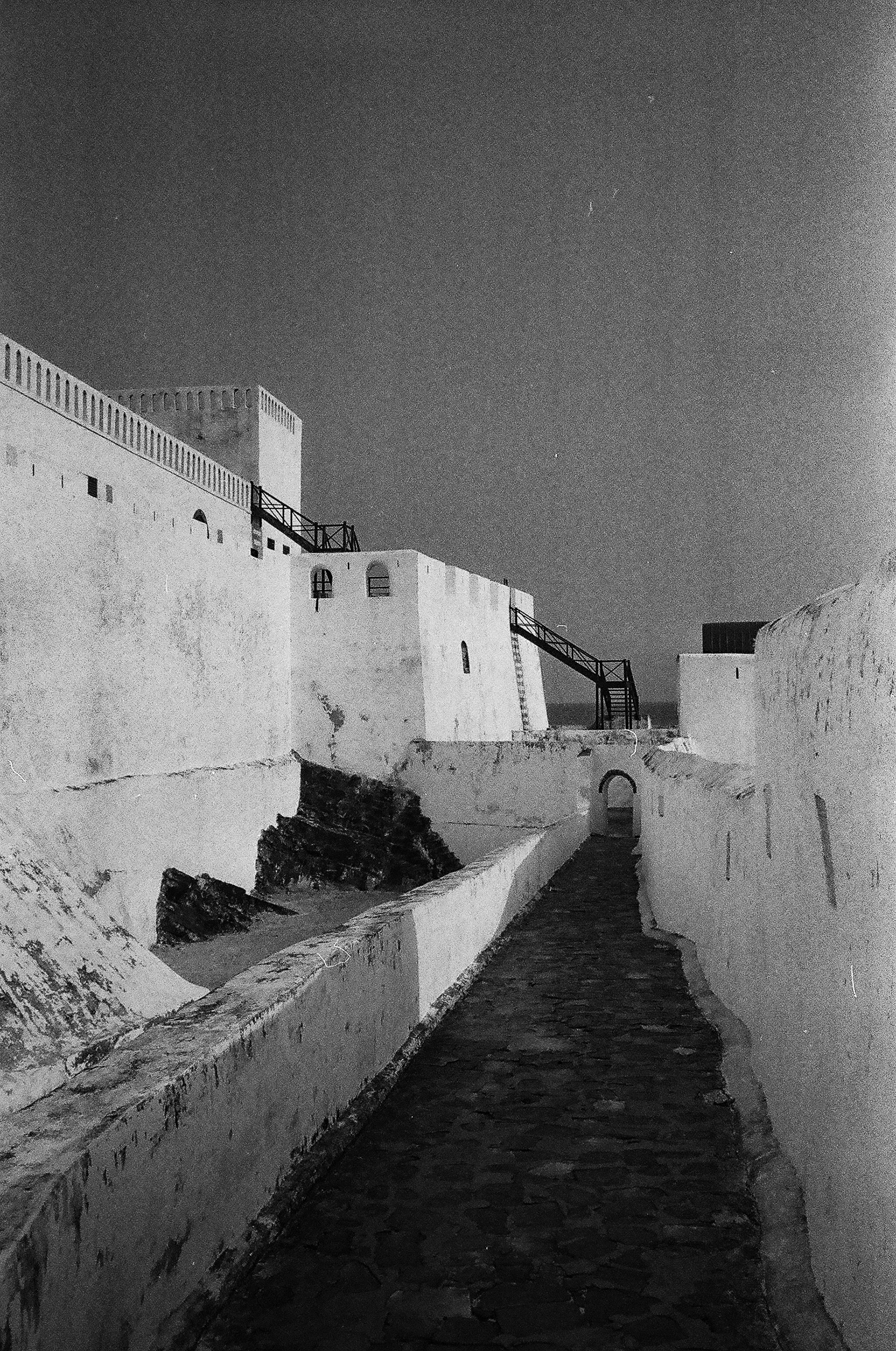 Erected by the Portuguese in 1482, Elmina Castle was the first trading post build on the coasts of Africa. As the oldest European building south of the Sahara Desert, the construction of the Castle marked the permanent involvement of European colonists on the African continent.
The Portuguese first referred to Elmina Castle and its surrounding area as “A Mina” (the Mine in Portuguese) because of the gold that could be found there. Soon after the Portuguese established themselves on the coast of West Africa, English, Dutch, Danish, and Swedish imperialists also constructed hundreds of similar castles along the coast between 1482 and 1786. These Imperialist forces were initially drawn to the region's abundance of gold, textiles, and ivory. During the height of the gold trade in the 16th century, 1,500 pounds of gold were exported from the Gold Coast yearly.

After its erection, Portuguese leaders proclaimed that Elmina Castle would not directly engage in the slave trade that was growing rampant in the Imperialist world at the time. Instead, the Portuguese Imperial force would become a proxy for the growing slave trade in Africa. By the end of the 16th century, The Castle was used as a storehouse for enslaved people from other Imperialist kingdoms operating in West Africa. Here, slave-catchers would sell enslaved people to the Portuguese in exchange for valuable goods and resources.
The Portuguese also involved themselves in the affairs of warring African tribes, forming alliances with stronger tribes and providing them with firearms and protection from rival tribes. Imperialist forces would give weapons to dominant African tribes in exchange for the enslavement of the prisoners captured from the weaker tribes.
The meddling of traditional relations between native African tribes created a lengthy period of hostility that lasted until the end of the 16th century, destabilizing the region forever. 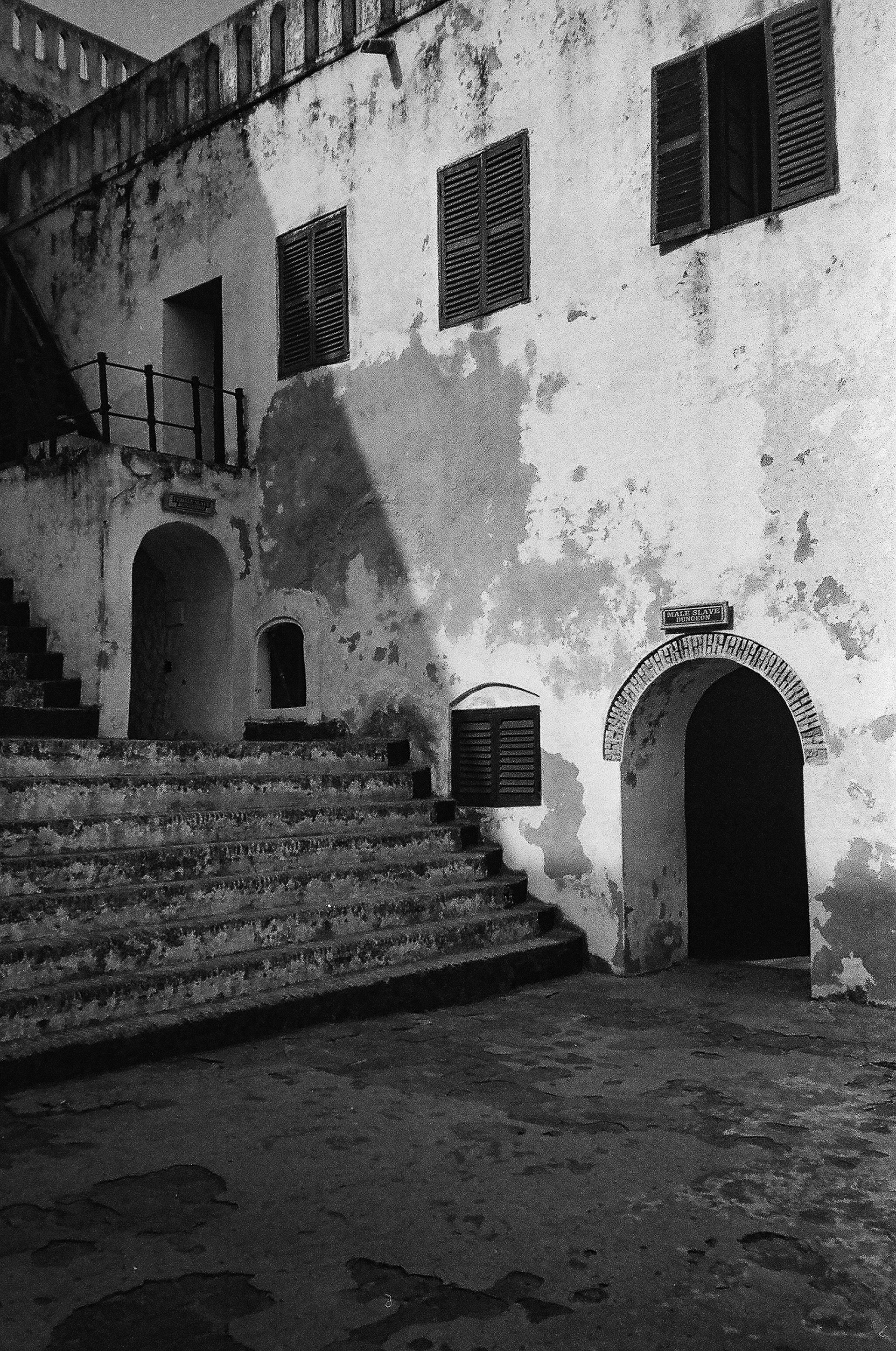 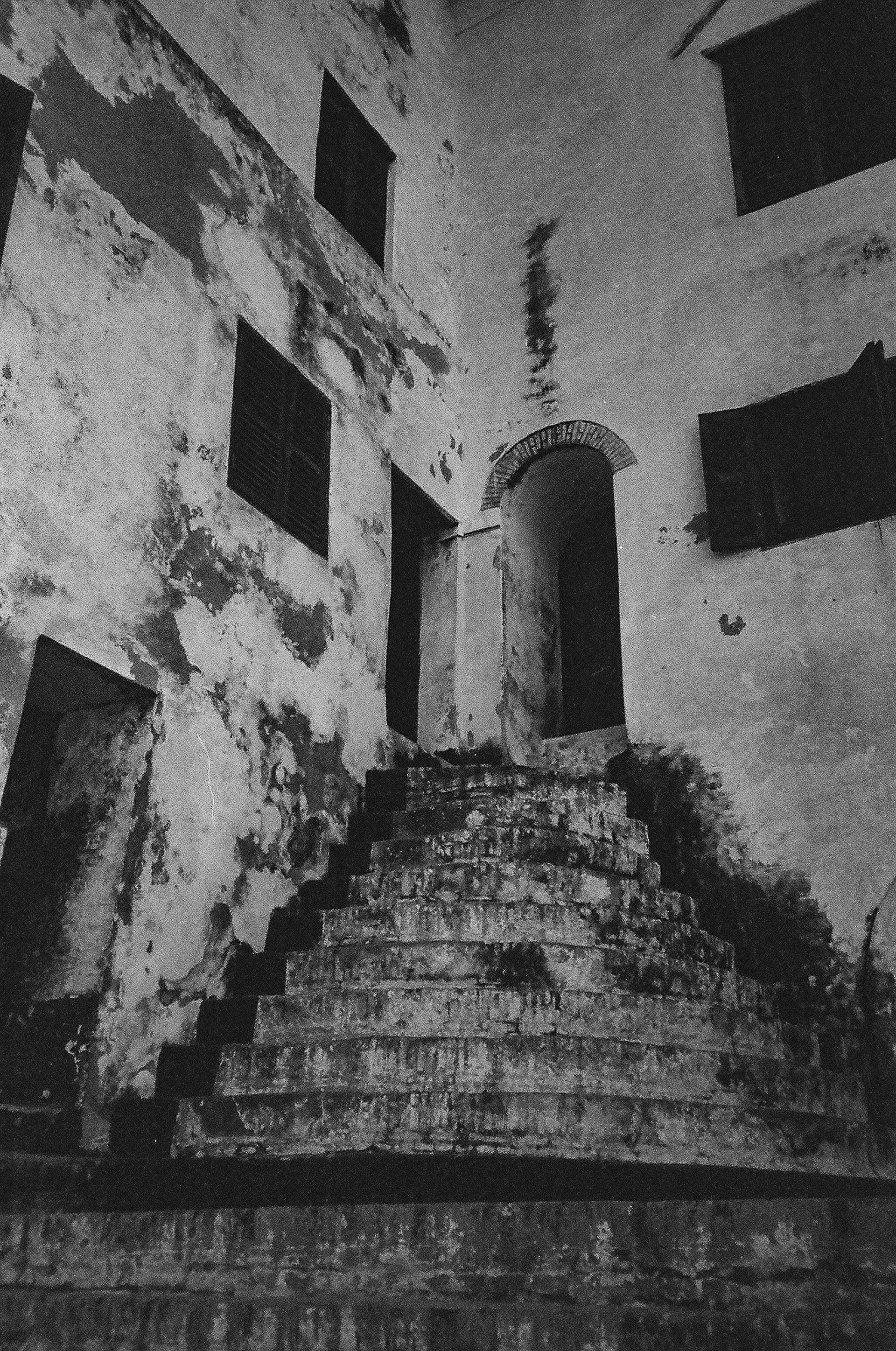 Elmina Castle was captured by the Dutch in 1637, where they transformed the Castle into a full-blown slave fort. From 1637 onward, Elmina Castle became the central hub for the Trans-Atlantic Slave trade, enabling the Dutch to easily export enslaved people to Brazil and the Caribbean. Roughly 30,000 Africans were imprisoned and sold every single year until 1814, when the Trans-Atlantic Slave Trade was abolished.

The corridor leading to the female slave quarters.

Enslaved people would arrive to Elmina Castle, having no idea what atrocious terrors awaited them during their captivity. Those captured were separated by male and female and stored in the Castle's dungeons. Slave traders would pack more than 1,000 slaves into basements that could barely fit 200 people at a time. No larger than a grade school gymnasium, these rooms were dark, cramped, and airless, creating an oppressive environment for the enslaved.

Inside the female-only dungeon.

Enslaved people were chained together, deprived of water, and lived in filthy, unsanitary conditions for up to three months before they were shipped away. Slavers would place a solitary waste bucket for the hundreds of slaves to share. However, due to being crammed and shackled together, everyone would need to move in order for one person to access the waste bucket. This, coupled with tribal feuds and language barriers between the enslaved, the enslaved would have no choice to defecate on themselves. These dungeons were overrun by disease and death.
Only 25% of enslaved people lived long enough to be shipped away. 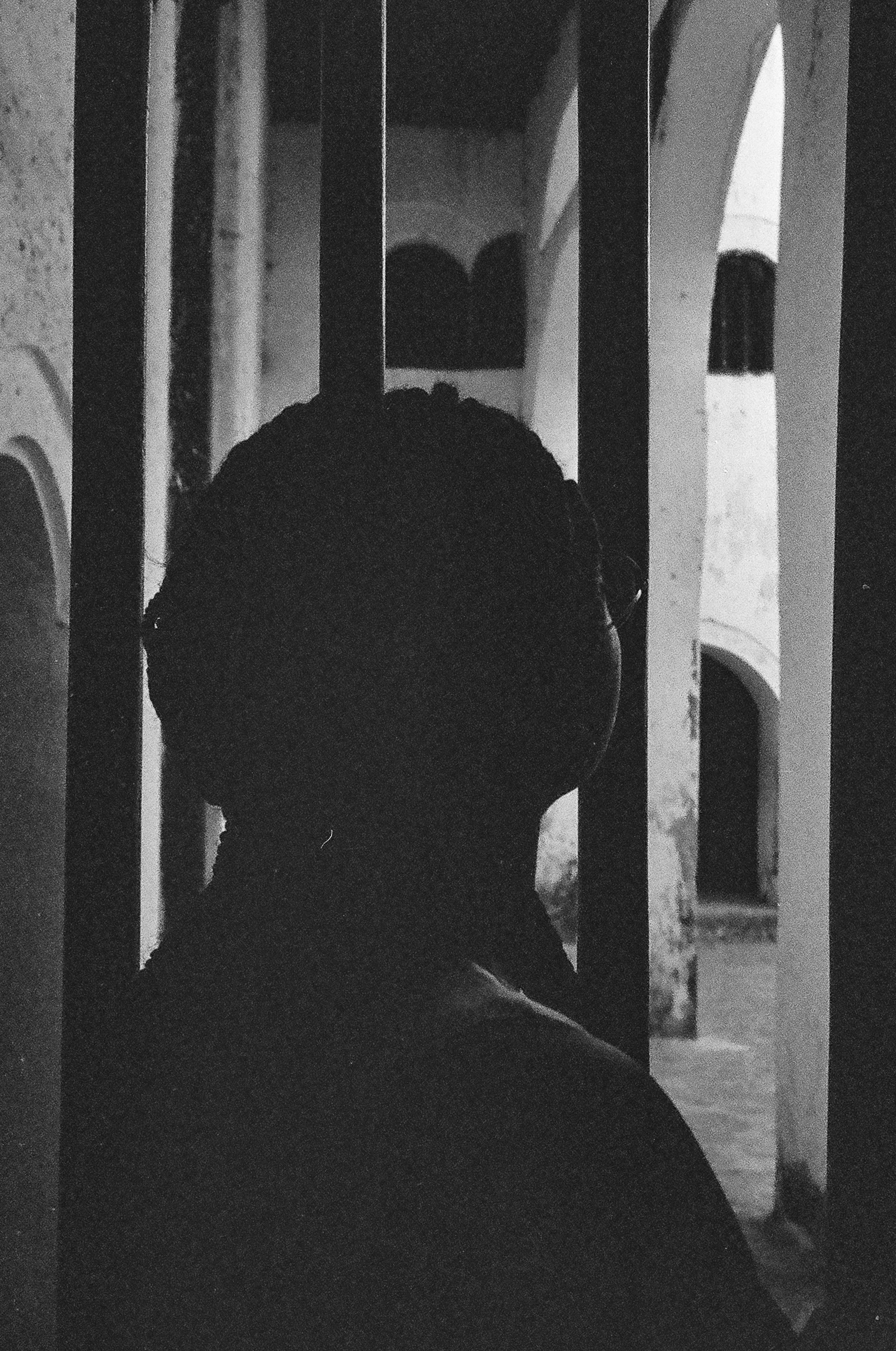 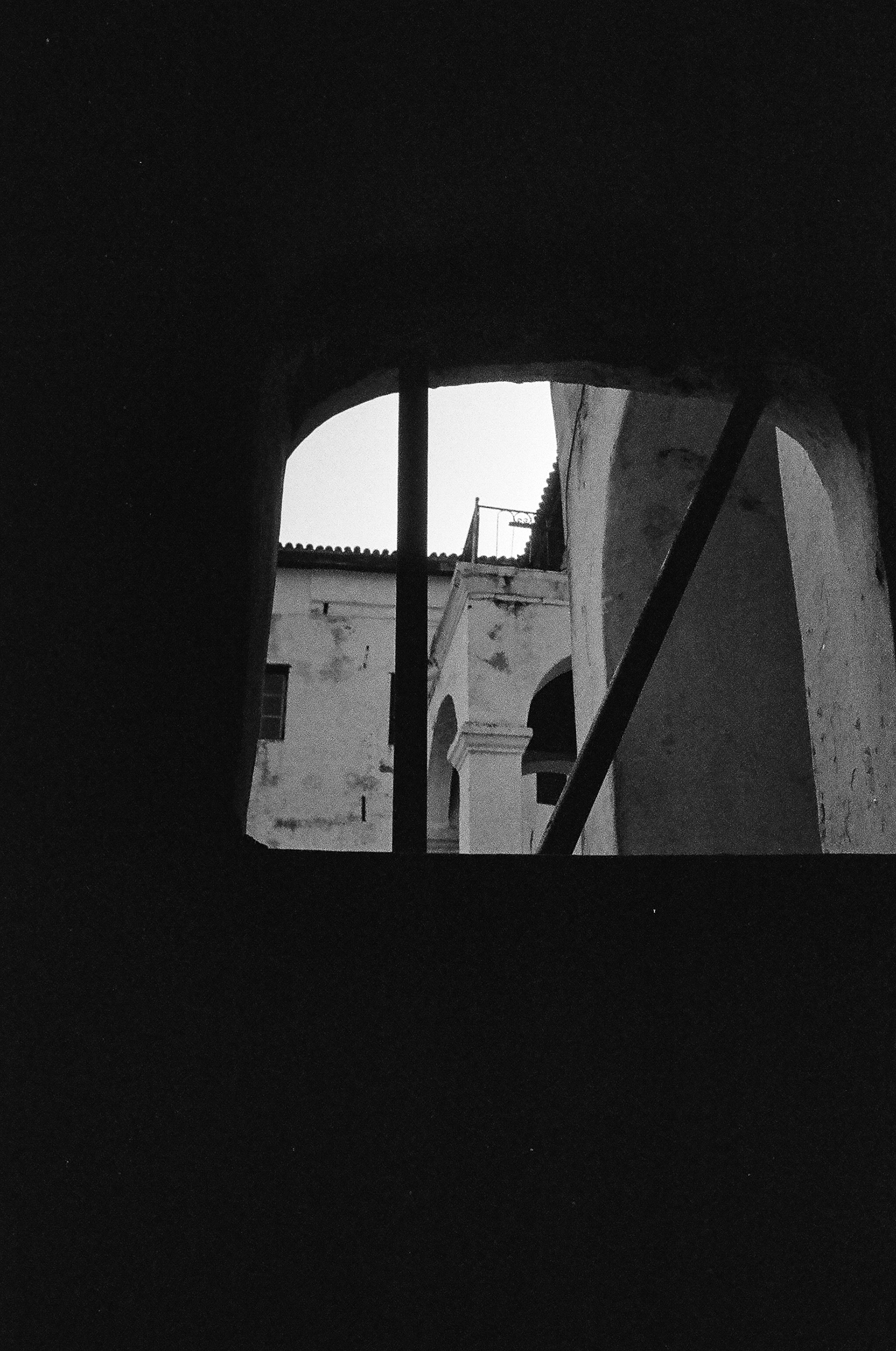 Some of the first dungeons were built without windows or ventilation, and slavers only constructed these systems after the odor emitted from the dungeons became unbearable for them to handle (depicted above).
One can still smell the scent of human decay in these dungeons to this day. 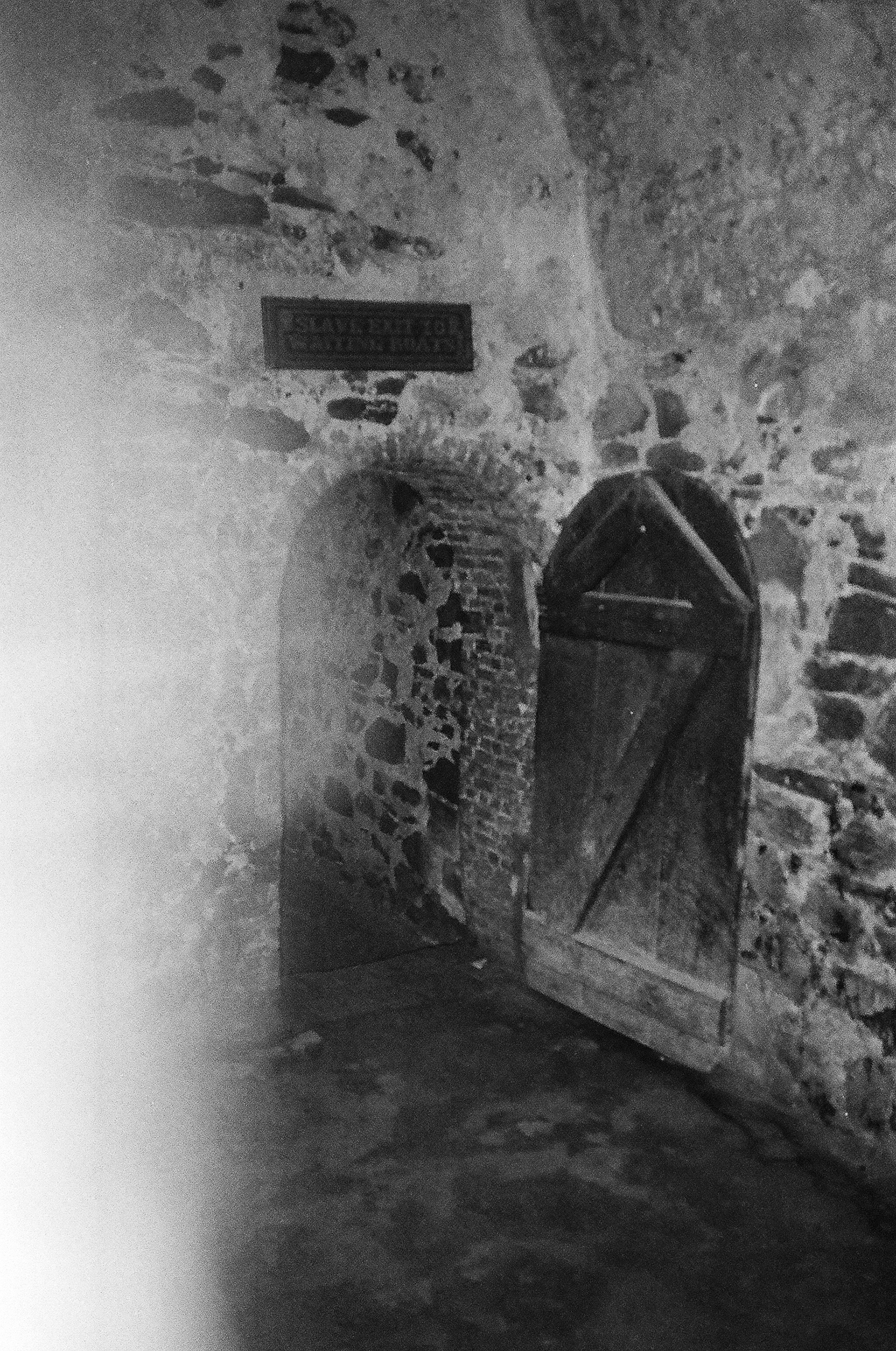 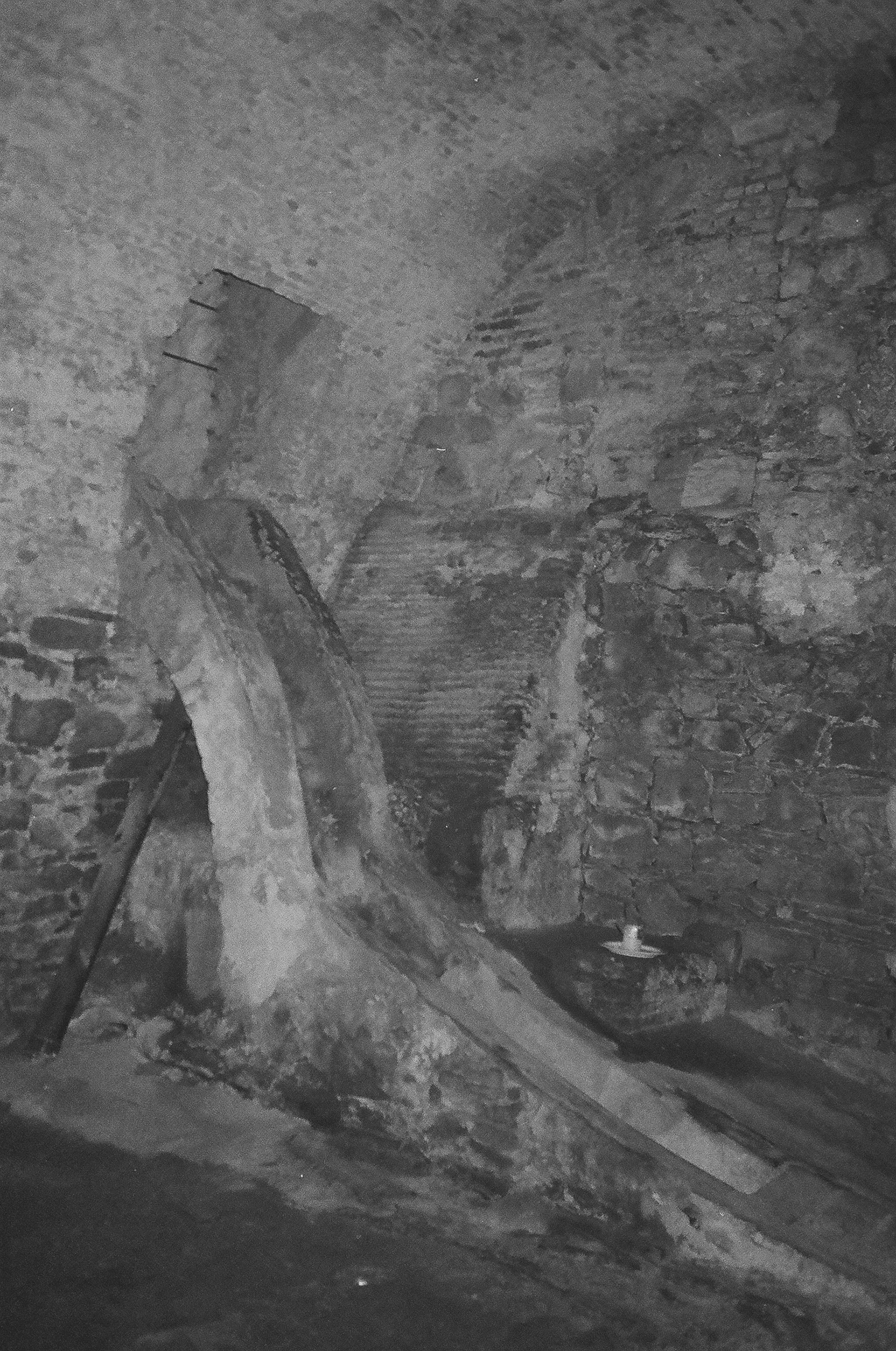 After three months of grueling captivity, the enslaved were then prepared to be shipped to the "New World." Enslaved men were brought through a door labeled "SLAVE EXIT TO WAITING BOATS" (depicted to the left above) and placed into another tightly constricted room (depicted to the right above). Enslaved women were forced into this waiting room through a makeshift chute connected to their slave quarters.

The Door of No Return.

Connected to this hellish waiting room was another smaller room containing the "Door of No Return." This portal existed between the castle and the slave ships docked at the shore. This door earned its name in blood; after passing through this door, the enslaved were brought to the slave ships, where they were stowed away for the arduous journey across the Atlantic. Any enslaved person that tried to flee for their life was shot and killed on the spot.
Visitors of Elmina are blessed to be able to return through the Door of No Return, as slaves who passed through this door would never see their home continent again. 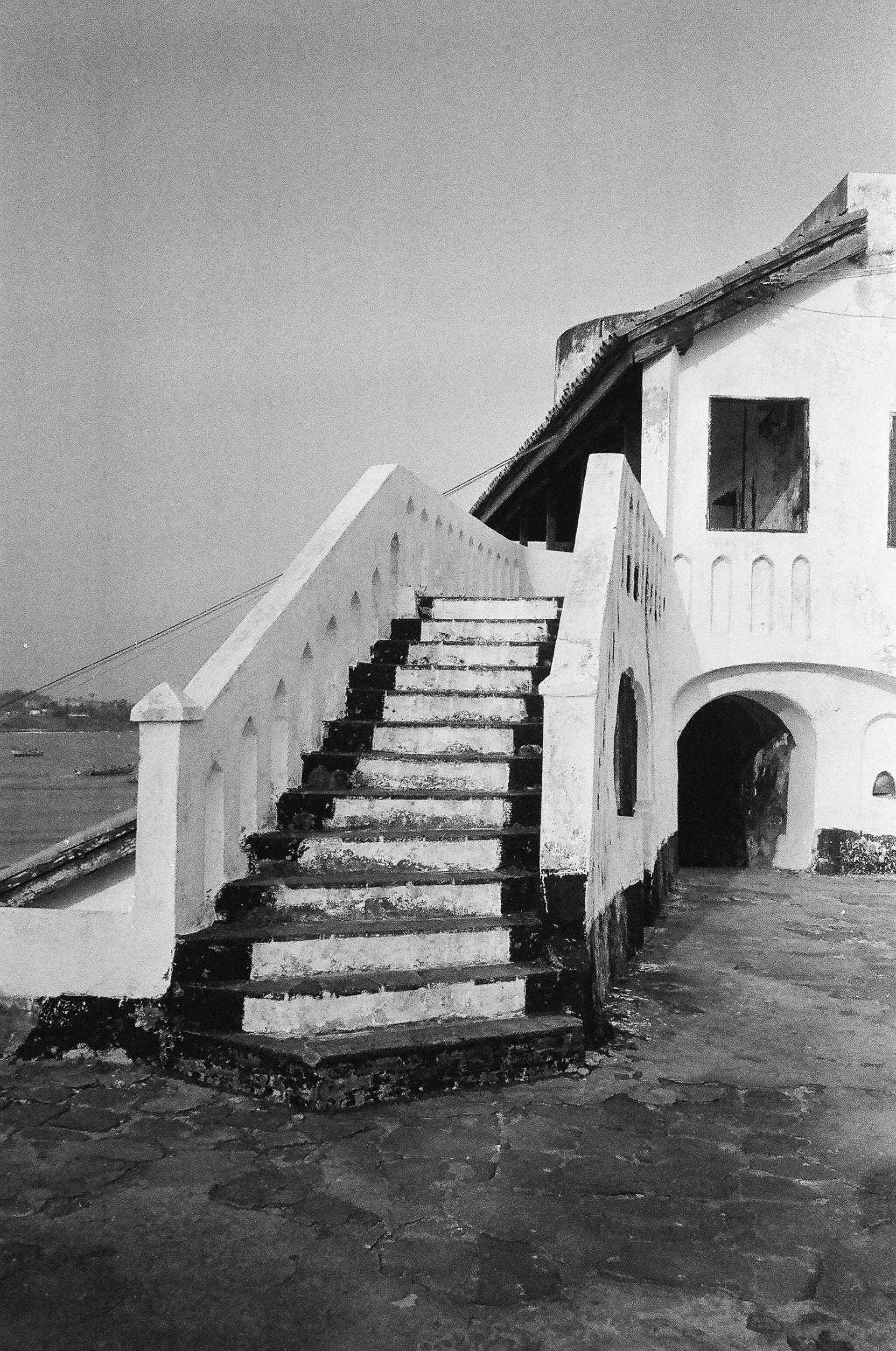 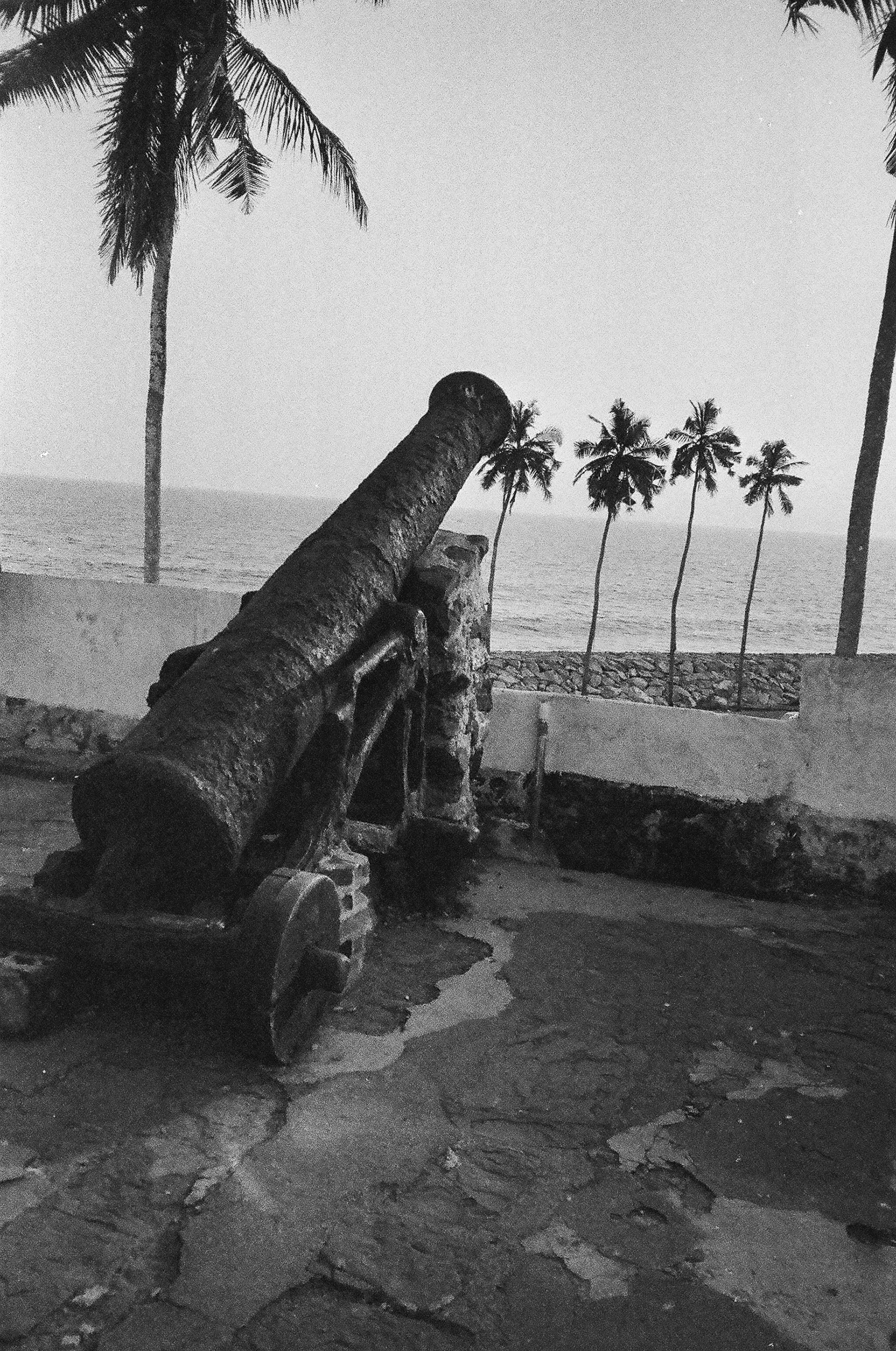 Elmina Castle was also used as a barrack for the soldiers that belonged to whichever Imperialist nation held the Castle at the time. Soldiers were billeted in quarters directly above the slave quarters, and army Generals and Commanders were stationed in the quarters above those of the Soldiers.

These quarters were breezy and full of sunlight, with breathtaking views of the Atlantic Ocean; a stark contrast to the dank slave dungeons below. One must wonder how the soldiers above were able to live with themselves knowing what was going on below them. But, in truth, many low-ranking soldiers would never come in contact with the enslaved. The upper quarters were separated quite well from the quarters below, such that those above would have no idea of the extent to which the orchestrated suffering of human beings was being conducted underneath their feet. 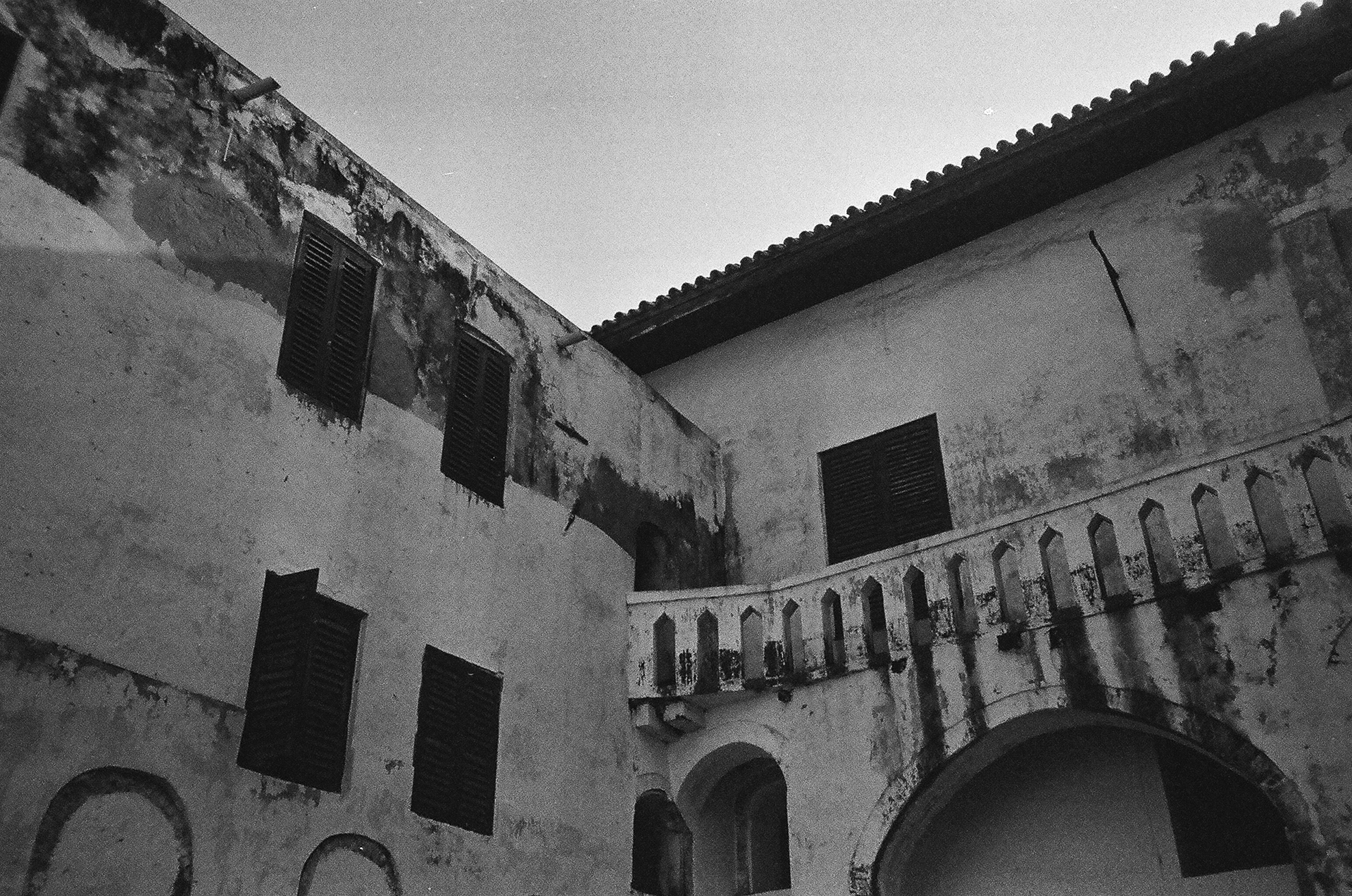 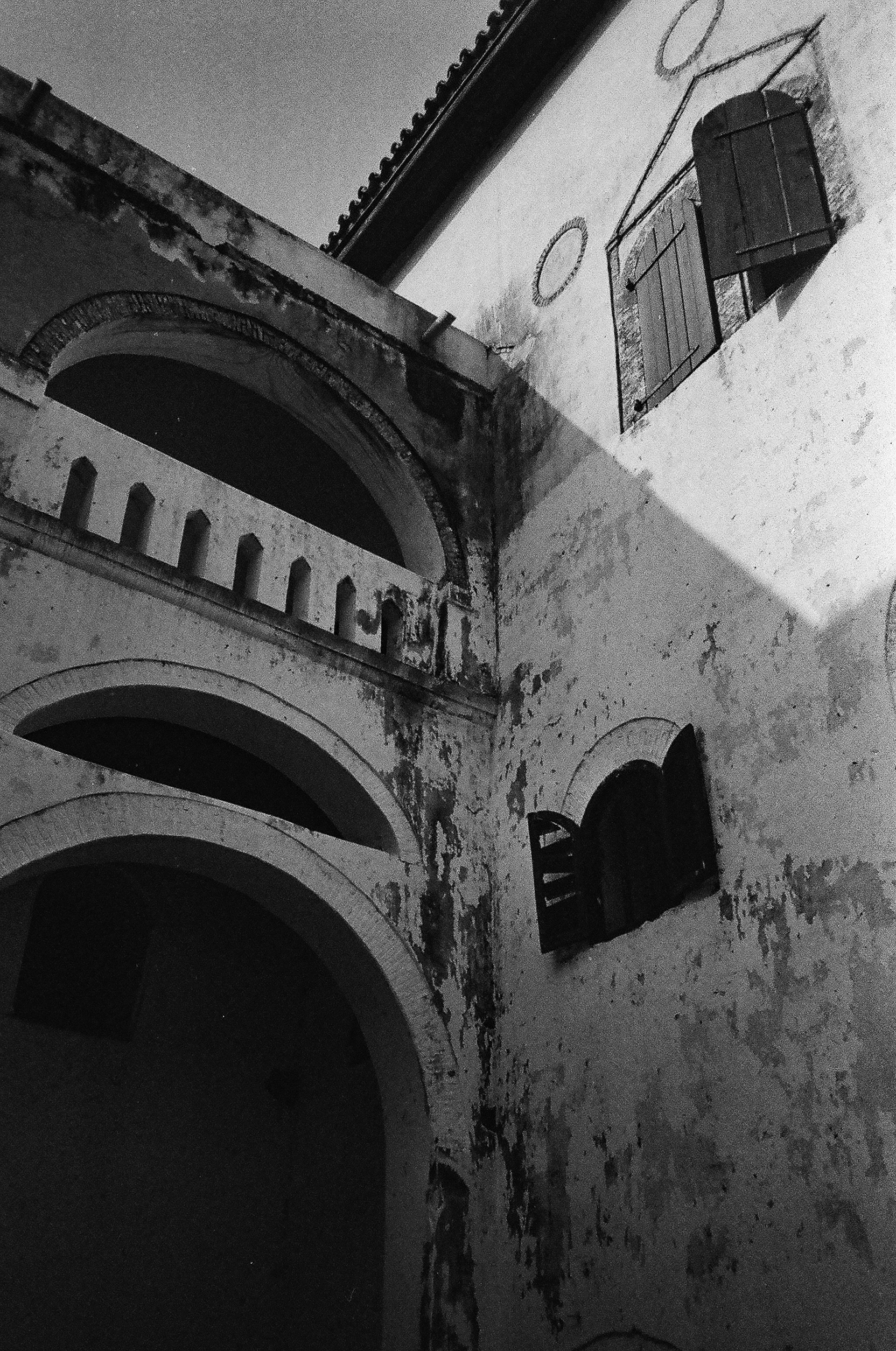 Raping of female slaves by high-ranking Generals was very common in these slave castles. In Elmina Castle, the General's quarters overlooked the courtyard above the dungeons (depicted above). At his will, the General would have his subordinates line up the enslaved women in the courtyard against their will. The General would then signal to his subordinates which female slave he wanted to sexually assault. The subordinates would grab this woman and bathe her in the well located at the center of the courtyard; a body of water thought to have been poisoned by the Portuguese during the Dutch invasion. 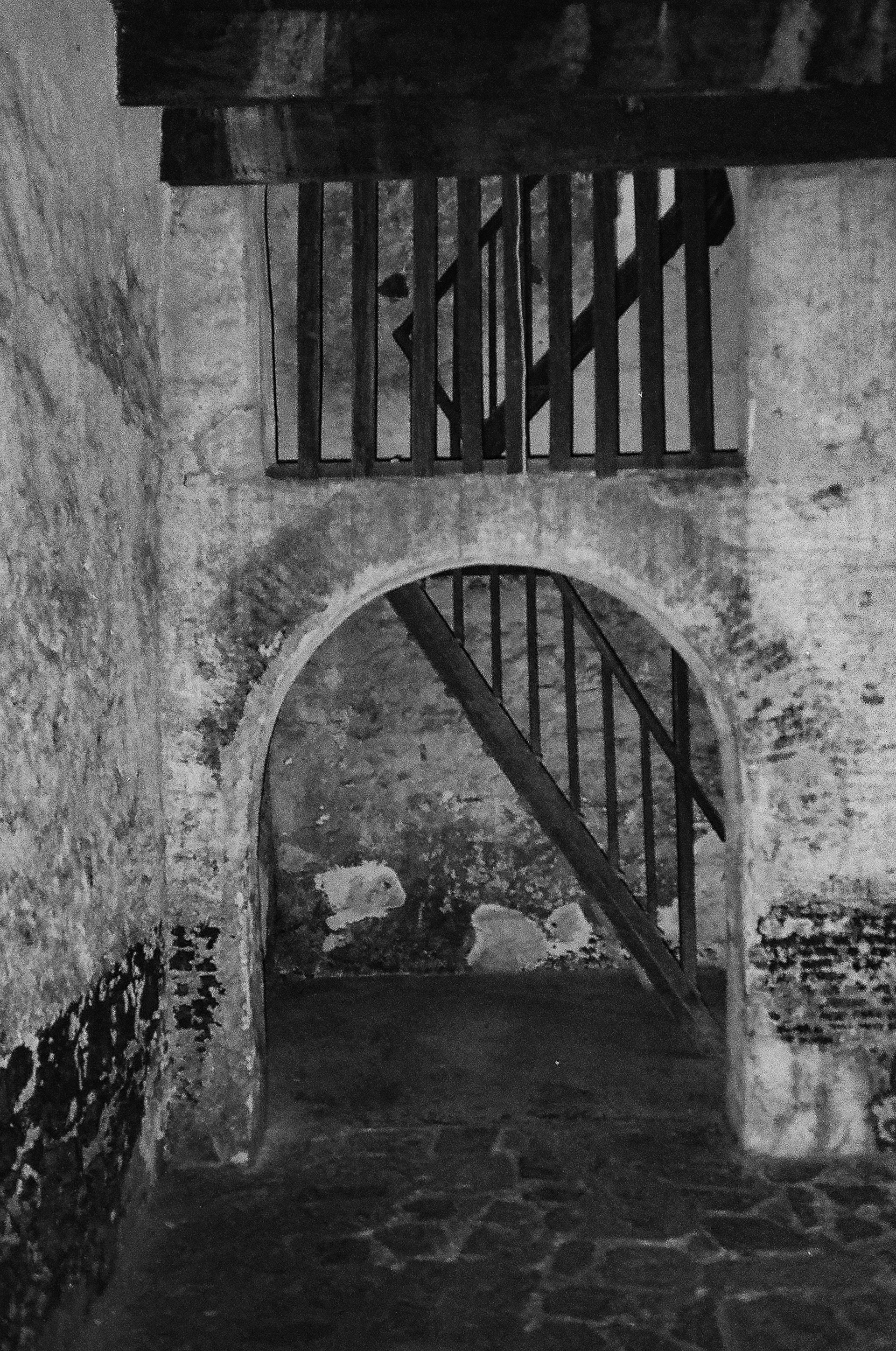 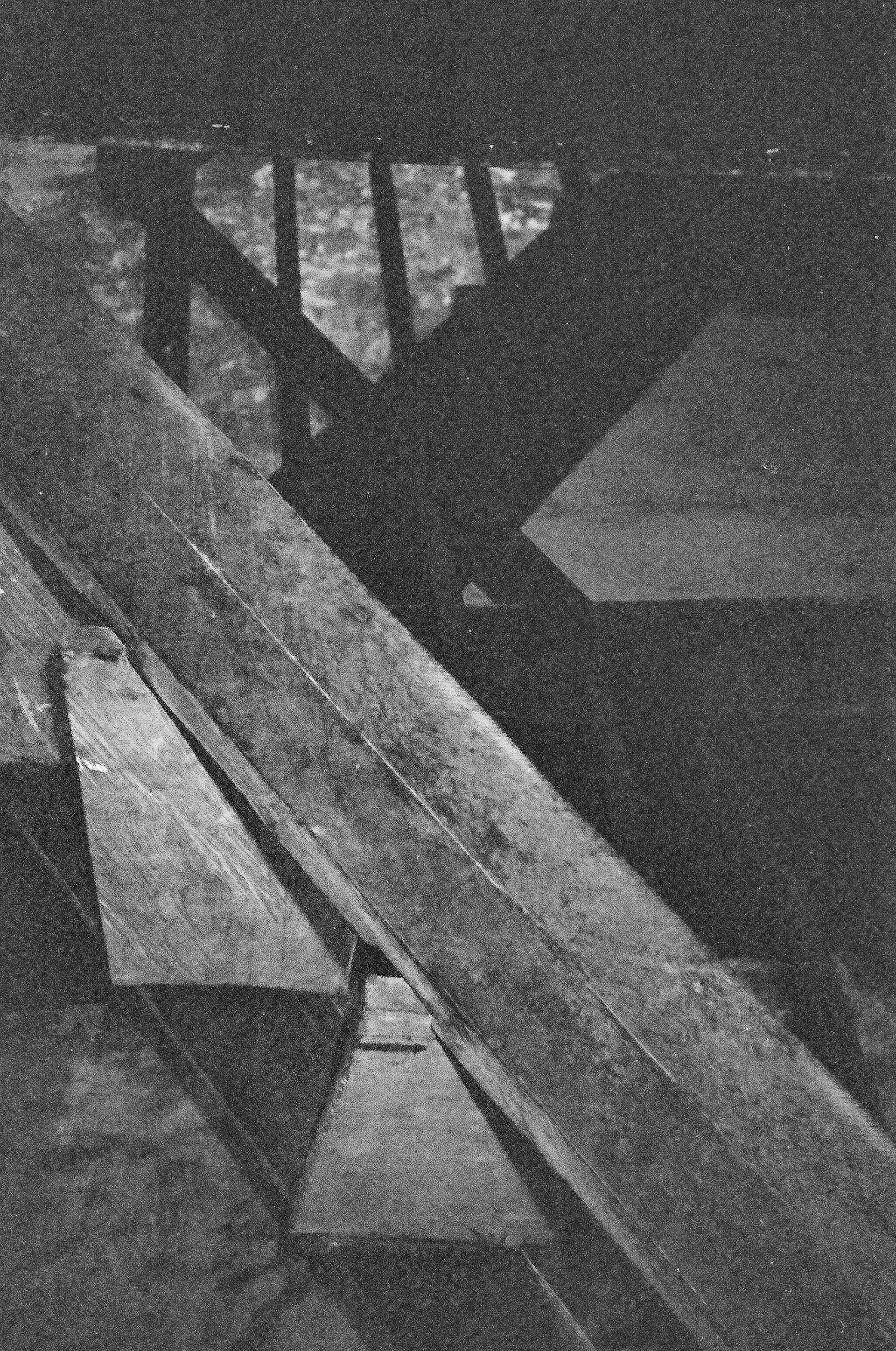 The woman would then be dressed in "acceptable" clothing and taken from the courtyard to the General's quarters through the staircase depicted above. A dark symbol of the times, this staircase was the only physical link between the lower and upper levels of the slave castle. Therefore, the only time that the enslaved would come in direct contact with the upper quarters was right before they were brutally raped.
For the women subjected to this barbaric act of violence, this would be the first and last time they would be clean, see the sun, and feel the breeze on their skin. 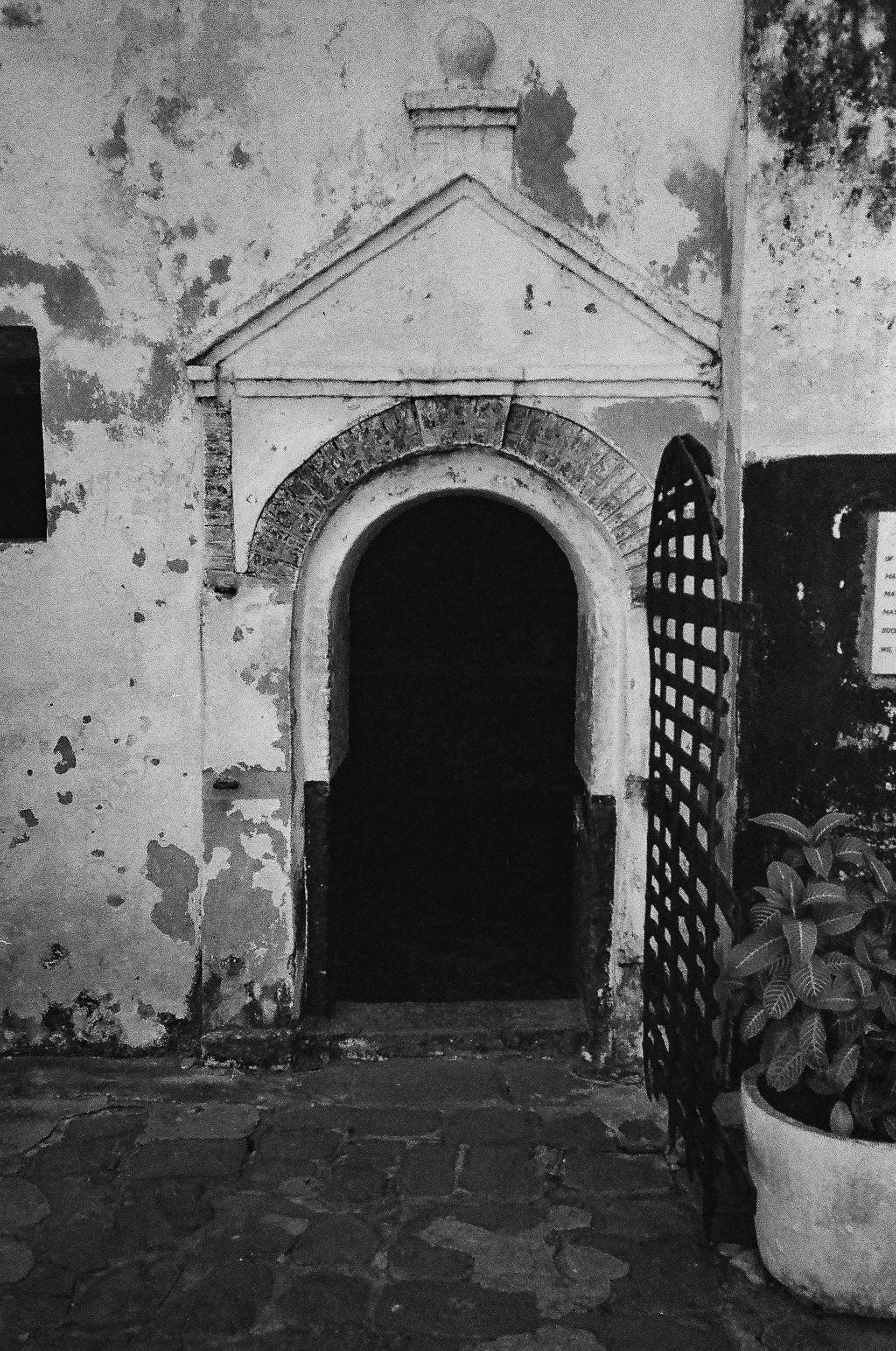 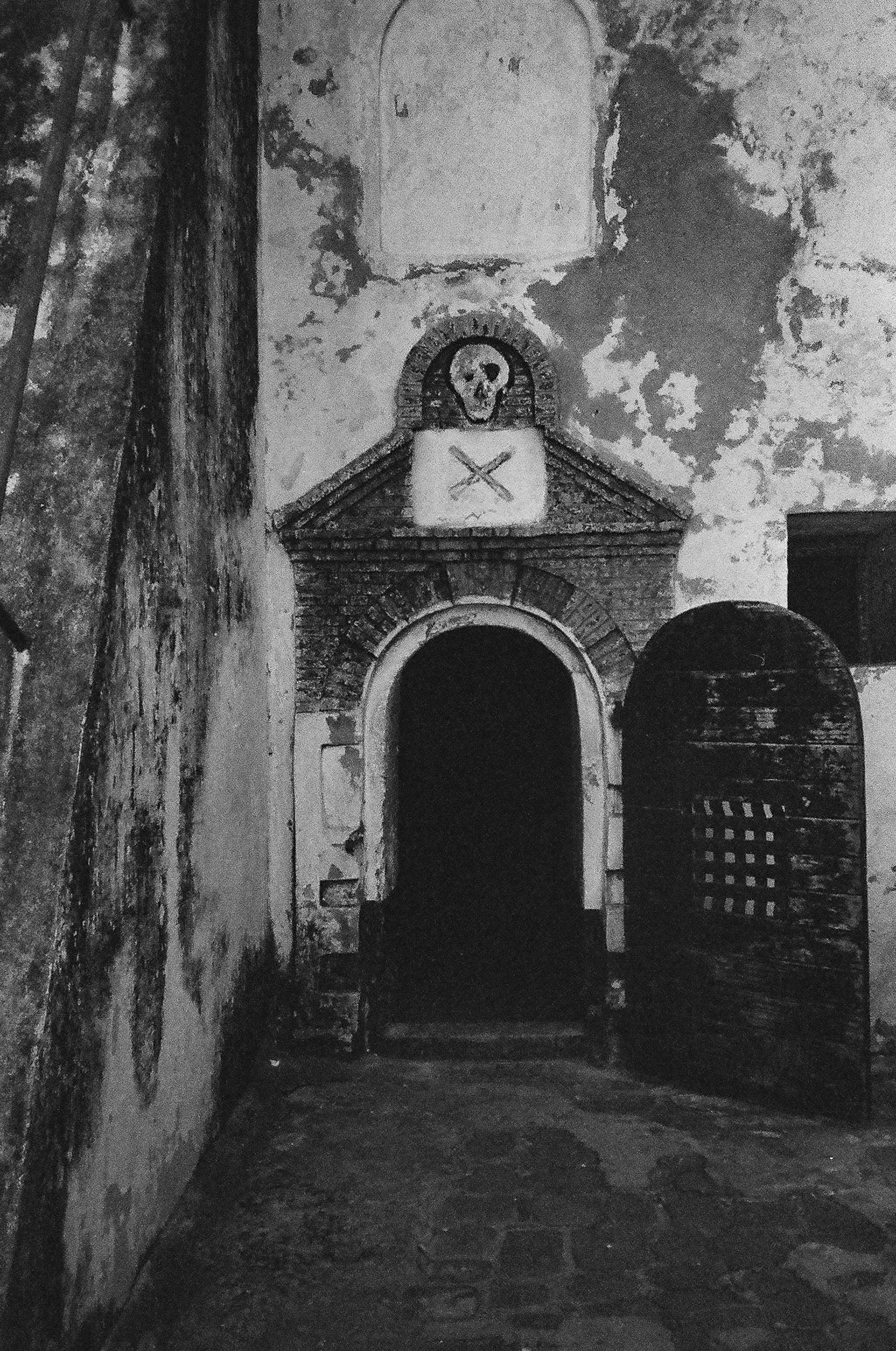 Slave revolts were a justifiably common occurrence in slave castles. The oppressive forced stomped out all thoughts of freedom from captivity with violence. Slaves who revolted were either murdered up-front, or subjected to solitary confinement.
Soldiers would also revolt against their commanders through acts of insubordination and were subjected to solitary confinement as well. However, similar to the quality-of-life differences between the slave and soldier quarters, the soldiers' confinement rooms were significantly more humanitarian in nature compared to the slaves' confinement rooms.
The soldier confinement room (depicted to the left above) was well-ventilated, with holes in the door for them to receive nourishment and interact with the other soldiers who were not imprisoned. However, the slave confinement room (depicted to the right above) had no windows for sunlight to enter the room, and its doors had less holes in it to let in air and sunlight.
Slaves subjected to solitary confinement were left alone in these dungeons until they starved to death. Upon dying, their bodies were removed by other enslaved Africans, almost as a way to say to them that this too would be their fate if they stood up against their oppressors.

After the Trans-Atlantic Slave Trade was abolished in 1814, Elmina Castle became a costly asset for the Dutch, who relinquished control of Elmina Castle and its surrounding area to the British in 1872. The British used the fort as a garrison for its soldiers during World Wars I & II.

Ghana finally seized back control of their land from their colonizers in 1957, including Elmina Castle. The Castle served as a training center for Ghanaian police recruits as well as a school before the Ghanaian government restored the Castle and preserved it as a historical site in the 1990s. Today, Elmina Castle is preserved as a Ghanaian national monument and it was designated as a World Heritage Monument under UNESCO in 1972.
Elmina Castle continues to serve as a powerful reminder of the history of the slave trade; an evil history that changed the course of humanity forever.
FIN.
(Shot in 35mm w/ Yashica T4 & Kodak T-MAX P3200 Black-and-White Film)
↑Back to Top